This week, I introduced the theme, and we talked about how it was okay to be scared sometimes. Then, we sang “If You Want to Hear a Story.”

Then, we did the “Monster Hunt” from Perry Public Library.
We’re going on a monster hunt.
We’re going to find a big one!
We’re not scared, but —
What if he’s under the bed? (pretend to peek under bed)
Better go over it, squoosh, squoosh, squoosh. (walk palms on legs)
What if he’s in the closet? (pretend to open door)
Better close it, SLAM! (clap hands loudly)
What if he’s behind the curtains? (peek through hands)
Better open them, SWISH! (fly hands apart)
What if he’s in the hallway? (shade eyes)
Better tiptoe down it. (tiptoe)
What if he’s in the garage? (shade eyes)
Better stomp through it. (stomp feet)
Shhhh! (put finger to lips)
What’s that??????
AAAAAAHHH! It’s a monster! (Scream loudly and wave hands)
Stop through the garage, (stomp feet)
Tiptoe through the hallway, (tiptoe)
Close the curtains, (fly hands together)
Open the closet, (pretend to open door)
Turn on the lights, (snap fingers)
And jump into bed. (jump)
Phew! (brush brow)
We’re not going on a monster hunt again! (shake head ‘no’)”

This is a cute book that teaches cause and effect, but the younger kids had a hard time following it. My threes and fours liked it a lot, though, because it was pretty silly.

Then we did a flannel based on Go Away, Big Green Monster by Ed Emberley

Our next book was Bedtime for Monsters by Ed Vere

This was a cute book that all my classes loved. I thought it was pretty cute, but I was worried it might scare the younger kids. They were braver than I thought, though.

Our next book was Some Monsters Are Different by David Milgrim

This is a cute book about being yourself and being proud to be different. It’s short, sweet, and to the point. The kids liked the part about eating different things and freaked out over the bugs on the plate!

After that, we sang our “Goodbye, Goodbye” song, and that was the end.

For our craft, we made shape monsters from All Kids Network so we could learn about our shapes and make some wacky creations.

NOTE: I did this storytime for a second time at my new branch and used Bump in the Night by Edward Hemmingway, The Little Shop of Monsters by R.L. Stine and Marc Brown, and Monsters Don’t Eat Broccoli by Barbara Jean Hicks. These all went over very well with the kids, especially The Little Shop of Monsters! We also made very recognizable monsters for our craft–Cookie Monster and Elmo! 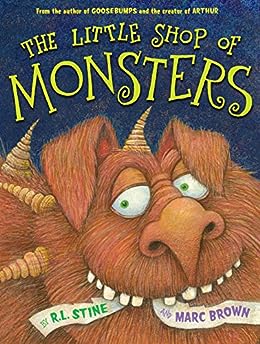